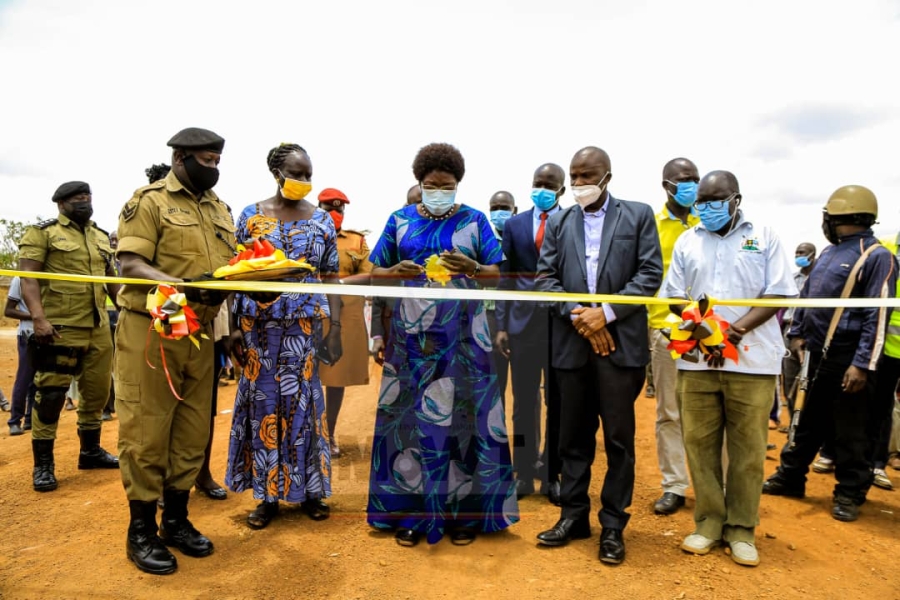 While handing over the Bridge and rehabilitated Dam, the first Deputy Prime Minister noted that the government recognized the important role that District and community access roads play in the socio-economic development of the country.

“Apart from National Roads, Government recognizes the great importance of District and community access roads, accordingly, more and more funds are being committed towards interventions on these road networks,” she said.

The Bridge construction works commenced on 17 June, 2019 and were substantially completed by 19 November, 2019 within the planned project period and contract sum. Upon completion, the project remained under the defects liability period until 19 November, 2020.

The previously existing crossing at the location lacked capacity to control the river’s flooding, using vehicles during the rainy season was risky and a number of fatalities caused by flooding were recorded.

The appropriate intervention was to build a 3-Cell box culvert, relief culverts and a retention dam. The works for the bridge were tendered out to SAED Technical Services Ltd, a local contractor, and construction works were carried out at a cost of UGX 1,943,404,540.

Additional works included River training and protection works including erosion protection of embankments; and the Re-construction of the dilapidated dam with a water capacity of up to 100,000m3.

The Dam was originally built in 1942 by the Colonial Native Administration, however, the local Government had since failed to maintain the dam rendering it dysfunctional. As a result, the local community lost their livestock.

As part of the project, the dam was reconstructed. The Dam receives water from nine streams in the Awoja water catchment. This water is utilized for production by the local population thus a means of livelihood.

The Commissioner for Roads and Bridges remarked that since its completion, the Bridge has served its intended purpose of controlling floods and providing safe passage during heavy rainfall. Previously connectivity between areas of Ayola and Apeduru from Asamuk Health Center (III) would be cut off by floods. The Dam is providing water for production and a means of livelihood for the local community.

The Deputy Speaker asked the people of Amuria to guard the bridge and dam jealously in order for the local communities and the country at large to derive maximum benefits from this investment.

“Specifically, there is need to guard against theft and vandalism of bridge furniture like handrails and road signs as well as other elements such as gabion boxes,” she said.