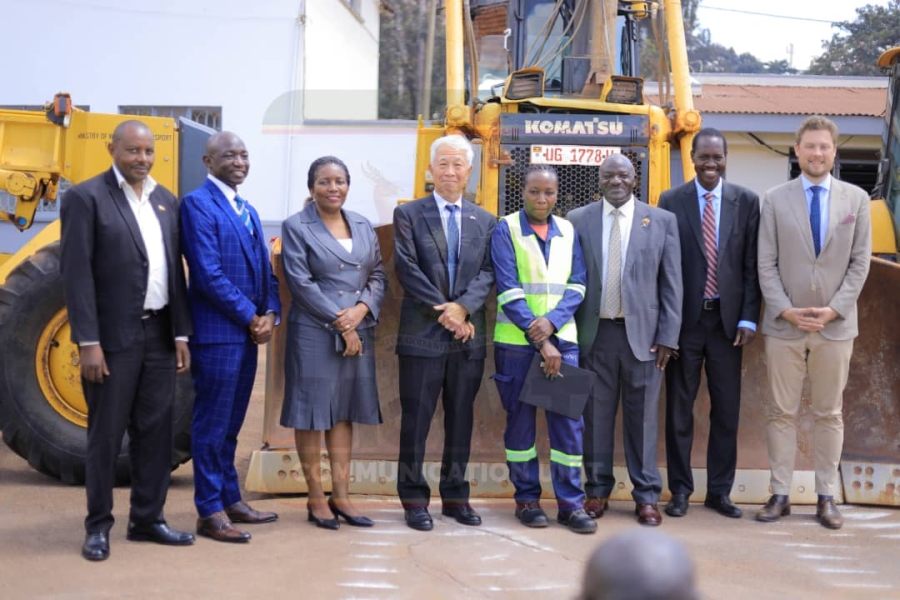 The Minister of Works and Transport Hon. Katumba Wamala joined by the Japanese Ambassador to Uganda, H.E Hidemoto Fukuzawa presided over a ceremony to pass out 45 institutional staff Trainers of Trainers.

The batch was trained by the United Nations Industrial Development Organization (UNIDO) under the recently approved plant operator trainer curriculum created by the Directorate of Industrial Training. The trainers of trainers have been trained and accredited as part of the proposed first ever Mechanical Engineering Training and Advisory Center- METRAC in Uganda.

An exchange of noted between the government of Japan and UNIDO and later project documentation between UNIDO and The Ministry of Works were signed in 2019 for the commencement of the Project for the Development of the Construction Equipment Operator Training Center.

As part of the METRAC project, 360 government and district local government operators will be trained between January 2023 and December 2023 by UNIDO. Additionally, the project will train 80 young men and women seeking employment in the infrastructure sector.

At the ceremony for the handover of the certificates, Hon. Katumba noted that Uganda faces a major challenge of labour force largely as a result of inappropriate skills and the slow labour absorptive capacity of the economy.

He also pointed out that the government of Japan has played a crucial role in the infrastructural development of Uganda and requested the Ambassador to convey the nation’s gratitude for the project grant.

H.E Tukuzawa Hidemoto, the Ambassador of Japan to Uganda pointed out that the Government of Japan considers Africa’s potential as the driving force of global growth and human resource development as even more important.

“This project worth 2.34 million started in September 2019 and the aim of the project is to bridge the industrial gap for road equipment operators in Uganda by building the first dedicated Vocational Training Center for the skill, developing a curriculum and training trainers, operators and youth,” Noted the Ambassador.

“With Komatsu as a partner, the project will involve expertise from Japan to establish a new training curriculum and capacity for road construction management and methods,” he added.

The UNIDO Country Representative Mr. Bruno Otto Tokwiny remarked that the occasion of handing over certificates to the Training of Trainers who will train the next generation of engineers in road infrastructure equipment maintenance is a key deliverable of the project.

He concluded by noting that UNIDO is proud to provide its expertise in the implementation of the project.

“We have significant experience in the operation of technical and vocational education and training (TVET) programs with particular focus on heavy duty/construction equipment,” noted Mr. Tokwiny.

The Under Secretary, Barbara Namugambe who represented the Permanent Secretary explained that a study conducted by Sumitomo Corporation, the suppliers of the equipment and Komatsu the manufacturers discovered that the causes of frequent early equipment breakdown was a result of the lack of skills by the operators.

It was therefore recommended that an operator training center is set up to ensure efficient operation and skills.

The ground breaking of the construction of the Equipment Operator Training Center is expected to be held in the coming months. The Center will be built on a 10acre piece of land acquired by the Ugandan government in Luwero.