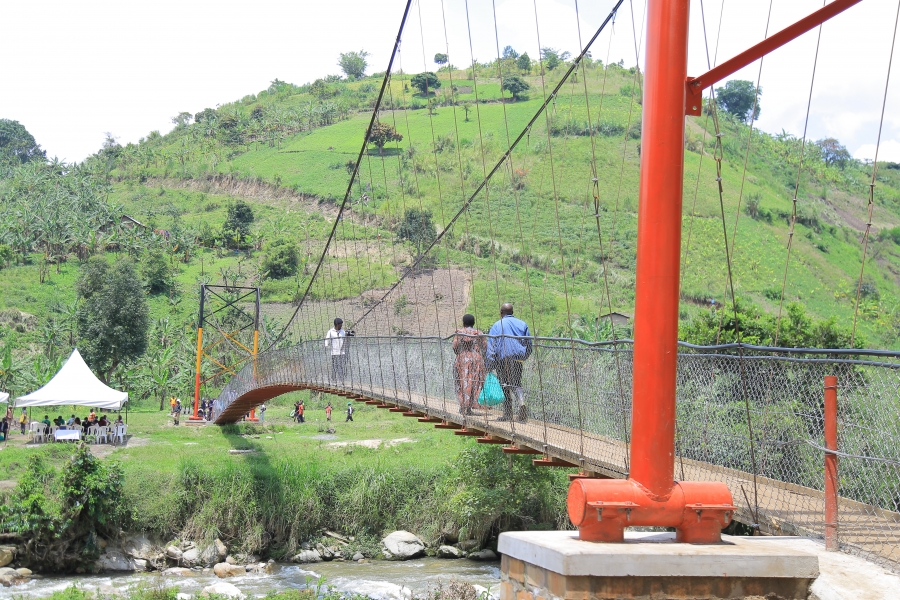 The Districts of Kasese and Bunyangabu have received a new suspended cable foot bridge. The newly completed Mihani cable bridge was handed over to the District authorities on 30th September 2021. The 67.0 span bridge seats over River Rwimi, providing connectivity to the rural communities of Bwesumbu and Kabonero Sub Counties.

The robust cable bridge replaced a dilapidated wooden bridge that was washed away by floods leaving residents to cross over the river on foot. This was risky and is said to have claimed more than 25 lives through drowning.

This was the 11th such bridge constructed under a collaborative partnership between Ministry of Works and Transport and an American NGO, Bridges to Prosperity (B2P) initiated in August 2017. The MoU started a 5- year program to construct Cable foot bridges.

John Kyaligonza, the Kabonero sub-county chairperson expressed relief at the handover of the bridge saying that the residents will now feel safer while crossing the river throughout the year including during heavy rains.

“Every year, we have been losing at least three people who have been drowning in the river during flooding. But we are now very happy to see our areas connected because we will now be accessing markets freely,” he said.

The project Manager, Eng. Zirimenya Andrew explained that the program has a capacity building component through a “Training of Trainers” initiative with MELTC. This imparts skills at different levels to enable deployment of the technology to other isolated communities with connectivity challenges.

The bridges are capable of spanning between 20 and 120 meters and are able to pass pedestrians, animals, as well as motorcycles.

This partnership is tailored to addressing a specific development challenge of poor and inefficient connectivity among isolated rural communities cut off by rivers, streams, gullies, valleys, revives and other topographical features, that make linkage , rural access or connectivity difficult .  In many rural areas of Uganda, characterized by Hilly terrains, citizens do not have safe year-round access to roads that can connect them to essential services such as hospitals, schools and markets. This challenge increases travel times and cost of mobility to access essential health care, education and other socio- economic services/opportunities. Particularly in hilly areas, bridges are an essential component of an effective transportation system.

Under this 1st MoU, whose targets are being accomplished today, the last bridge (11th overall bridge) to be implemented is Mihani - Kirachadi suspension Foot Bridge (67.0 m span). All the other initial 8 (Eight) bridges were implemented in Eastern Uganda (Greater Mt. Elgon Area Districts of Sironko, Kapchorwa, Kween, Bulambuli, Mbale, Bududa, Manafwa) and were successfully completed and handed over to the beneficiary District Local Governments for continuous maintenance to ensure sustainability.